Our brains are weird.  I haven't even been thinking about spells recently but trying to fall asleep the other night Vancian spell slots popped into my head and a tumble of ideas:

With most of the spells I've come up with I've tried to build a cost into the casting of them, so that level might not matter as much. But the ultimate built-in cost of a spell might be a permanent limit on casting it:

1. The spell you can only cast once.  What spell would be interesting or good enough to mess with if you can't cast it multiple times?  Maybe they are spells with permanent effects and the power is based on the level you cast it at.  Like a permanent Palimpsest Pack.  Do you want to have two packs at second level or wait around until 5th foregoing all the convenience the spell would give you now for more convenience later?

Then I thought what if there was a limit to how often spells could be cast at all, by anyone?

2. The spell with 1d4 castings per campaign.  You might call them Grand Dweomers or something.  What the heck would be powerful enough to be so limited?  Maybe a gate to another plane or mass charm type spells or zombie armies.  In a way this is like an artifact with limited charges and would have the same potential for plots and quests.

The Vancian system, by definition, is one spell-one slot, but what if it wasn't? :

3. Spells that cost variable slots.  Rather than having weak monster summoning and strong monster summoning, what if a spell was just a type of reaction and the caster decided how many slots to use up in memorizing it.  Traditionally some spells scale with level, but these would only scale if you decided to use up more spell slots. This would take more bookkeeping, though, so your MU player knows they have 1 2 slot magic missile and 1 3 slot magic missile, or whatever.

4. Spells that cost variable slots II.  Another way to think of spells that have different slots costs is if spells were like computer algorythms: some might be more efficient than others.  So you find magic missile that costs 2 first level slots to memorize but you've heard of a version that only requires 1.  This would tend to make wizards weaker because the most common spells would probably be weaker than traditional in this kind of campaign.  It would fit the idea of wizards scouring old libraries for spells well, though.

6. Contingent spell slots.  What if you could keep 2 lower level spells "on hold" in 1 higher level slot and then pick which one, but only one, to cast later?  Why would you want to ?  Well maybe the lower level spells are utility spells of some sort and you don't know what you'll need in the next adventure.  It would allow the caster to sacrifice some firepower for flexibility.  This breaks the definition of a Vancian slot technically if not in spirit.

7. Multi-Slot Rituals.  Spells so powerful they require more than one caster are a cool idea that show up in the literature a lot, but not really in old school D&D.  What if you made a spell and said it requires X number of slots.  You could treat this unit, "slots," as first level slots so a ritual of 4 could be prepared for and cast by 4 first level mages or 1 5th level mage, using all their available first level spell slots. You might also convert slots by multiplying by level.  So that same ritual could be cast using 2 second level slots or 1 4th level slot.  Starting to get mathy, but if you wanted a world that had a lot of social, multi-caster magic I think you could do it with little trouble.

8. Multi-Spell Requirements.  What if to cast a certain spell you had to have other spells in memory?  That latter spell would have to be pretty good to be worth it.  The list of spells needed might make sense, for example a low level fire spell and and a low level wind spell required to make a high level firestorm spell.  If you had all powerful spells assembled from lower spells you might be able to do away with levels all together.  The lower level spells could be consumed or not.

9. Research branches.  This isn't related to slots so much as learning new spells.  What if you could only learn spell C after you've learned spells A and B?  These could be like branches of magic: fire spells or charm spells for example.  I suppose this could be a way to limit caster power without requiring levels at all as well.

10. Sacrifice spell slots for Permanency.  First edition made you lose constitution points and only allowed a greatly curtailed spell list to be cast permanently.  What if you made it much simpler: cast a spell at its level and then lose that spell slot permanently (even if someone dispels the spell).  That would be interesting and cause for some tough decisions I'd think.

11. Sacrifice spell slots for Psionic Powers.  If spell slots represent some inherent mental capabilities, what if you could sacrifice them for psionic abilities?  See this post.  You could use some kind of conversion like that mentioned in #7 and have each slot raise your power by one.  Would losing 2 first level spell slots permanently be worth having precognition that allows you to see the future several months ahead?

12. Spell slot fingerprints.  You might have players roll up a pattern of slots their wizard will be capable of memorizing at character creation.  This would make magic use more like a genetic ability.  Maybe wizard A has few low level slots but can hold more 5th level spells than anyone around while wizard B can hold tons of low level spells but few higher level.  I guess this would give MUs something like a Dragon ball Z power level.  It would make some mages much weaker at start than they already are for a payoff later that is already hard enough to achieve for old school play, though.  It also goes against the idea that through learning and practice you increase your ability to work with difficult magic.

13. Non-Slot spell limits.  The system of how many spells of which level you get per caster level is one chart I always have to check.  I would prefer something simpler.  You might use other numbers to limit spells cast per day.  How about: Int points, Int bonus points, Con points, HP, or even XP.  This is basically the simplest possible spell point system.  Of course you'd have to figure some conversion factor for high level spells or just convert all the traditional spells into your new units (e.g. magic missile = 1 Int point cost).  Using attribute points would result in much fewer spells.  HP would scale with level but change the tone of magic to one of strength as power rather than knowledge.  XP might be the most interesting possibility, it goes up but then whipsaws back down when you use your powers.  You would probably want to use your spells as little as possible.  That seems very like a Sinbad movie. 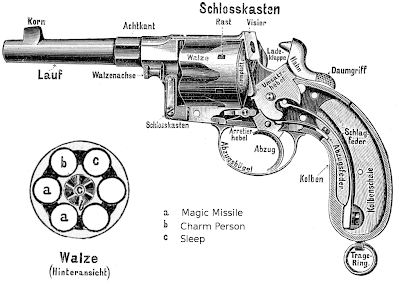 One of the criticisms Vancian magic gets is that it makes magic like bullets, but what if we embrace the idea of spells as ammo and see where it goes:

14. Shift spell type.  Just like you can load blanks in a revolver, you might allow for memorizing different types of spell "ammo."  Then you wouldn't need an illusionist class, for example, just make every spell also available for memorization as an illusion.  You could have other types of spell ammo, like fire, shadow, or poison instead of having to invent many different but similar spells for pyromancers and shadow mages the way 2e did.

If we think of spells as ammo you might wonder what the gun is:

15. Wands and Staves as foci.  Rather than giving magic items limited spell casting ability make them true focuses of power.  So, any caster without a focus has all spell range, duration, damage at 1/4, with a wand, 1/2, with a stave normal.  And these items could have requirements as to materials or value in your campaign.

16. Wands and Staves as spell slot holders.  Rather than charges you must place at the creation of a magic item, what if these had slots just like those in a wizards brain?  So a wand might have 5 slots and you could put whichever 5 first level spells in it each day that you wanted.  It could be interesting to have a campaign based on this, where no person is capable of holding spells in their head, only loading them into magic items.  Finding more powerful items would be a big goal.  Also, can non-wizards release the spells?  That would create an even differently flavored magic campaign.

17. Multi-spell memorization packages.  What if you could quickly learn certain combinations of spells together?  This is like a banana clip.  It is similar to #8 above but meant to be an advantage.  It would probably only matter if you are a stickler for memorization times or conditions.  Might still be cool to have a magic statue in a dungeon that dumps 6 spells in your brain when you touch it, or maybe fills any empty slot with the same spell-- all of a sudden you have 10 more magic missiles.

18. Quick Swap spells.  Related to the last idea. Think of the way some FPS limit the kind of weapon or grenade you have and when you encounter a new one you have to decide which to keep.  What if you approached the statue in the dungeon and you could have a cool new spell only if you dumped one you had memorized.  This would be more interesting if you allow players to scribe brand new spells into their spell books from their minds.  Heck, what if you could swap with nearby casters.

19. Spell Slaves.  If spells were that easy to swap from caster to caster a powerful mage could keep a bunch of lower level "clip" mages around to grab spells from their memory when needed.  Why not just have all those noobs cast one their own, though?  Hmm, maybe the spells become more powerful when cast by a higher level caster or maybe they involve control of summoned monsters or something that the big wiz doesn't trust to the minions.

20. Spell Entities.  What if spells are not used up but must be removed from memory and stored elsewhere to allow for other spells to be memorized?  This would make spells more like pokemon.  It would also make wizards much more powerful if they could repeatedly cast something like magic missile (and it just returns like a boomerang).  Well, unless those kind of direct damage spells became much more rare in the world.  This kind of campaign/wizard would be more interesting if the DM really put pressure on storage and safety of those spells not in your brain.

Okay, that's all I got.  I'd be supremely surprised if a lot of these haven't shown up before.  But maybe one or two are new to you.  I think the multi-slot rituals and the slot-sacrifice permanency are actually things I might try in my game.
Posted by Telecanter at 9:47 AM