It's been almost four years since I started this blog and began to take part in the excitement of what we came to call the Old School Renaissance. It seems that the community has already coalesced around a narrative of what the OSR was.  The story that will probably be told in thirty years is something like this:

In 2000 Wizards of the Coast created the Open Game License which several years later allowed folks like Matthew Finch, Daniel Proctor, and Stuart Marshall to create clones of old Dungeons & Dragons rules systems that were no longer being published.  These retroclones were unexpectedly popular and led to a flourishing of amateur and independent products designed for the older systems.  In 2012 WotC began selling reprints of first edition D&D hardbacks and 2013 made many of the old TSR products available as pdfs and discussion of the upcoming D&D release, D&D Next, indicated that some old school sensibilities were taken into account when developing the rules.  The OSR had succeeded!  A community of enthusiasts bridged the drought of old system availability and re-introduced a whole new generation of gamers to the fun of old school style play.

That's not my OSR.


My OSR goes something like this: After a multi-year break from the game, I was hungry to play again and ready to try and find some fellow players.  About that time I stumbled on to the Swords & Wizardy retroclone.  I don't remember how, to be honest, but it was probably articles on the death of Gygax leading me to the Grognardia blog and then a larger search of D&D online.  My initial excitement was based on a misunderstanding.  You see, I missed out on the 3rd edition branch of D&D entirely, so when I saw some of the changes made to D&D in Swords & Wizardry I saw them as awesome revisions.  I didn't know that ascending armor class and a simplified saving throw were backported by Mr. Finch because of copyright infringement worries.  I thought he came up with those as house rules and included them because it made the game better.

To me, the retroclone as a clone, allowing for playing the old systems, was kind of a silly idea since I had multiple copies of most the old D&Ds.  I'd seen them for years like flotsam on thrift store shelves.  No, to me the retroclone was a license to embrace the old rules while revising them.  Not nostalgia, but innovation.  Not carefully filling the gaps of a corporate product line but reinvigorating the idea that I could do it myself.

Well, not by myself exactly.  The real thrill of the OSR, and it sure as hell seemed like this was shared by a lot of other bloggers at the time, was a conversation between a lot of makers about what they were making and why.  I had been thinking about the game on my own for almost thirty years and almost every blog I checked had cool approaches and ideas I'd never had a glimmer of a thought of.  So my OSR was the best combination of the permission to do my own thing and a community of people sharing and helping each other.
Back to the accepted history.  I think the reason you see some arguments in the community about whether the OSR includes just D&D or other games from the old days is because this complicates the narrative.  I know there were blog posts about Tunnels & Trolls and Traveler back when I started, but those games had never gone away so they don't fit the story of the OSR as a bridge.  It's true that most conversation circled around D&Ds, but there were whole series of posts about Fantasy Wargaming and Warhammer Fantasy and porting some of their ideas back into those D&Ds.  If you focus on the fact that  the emphasis was on D&D in the OSR because you think it was the product we all wanted and couldn't buy, you are misunderstanding that it was just the dominant dialect in a wide ranging conversation about role playing.  We were looking everywhere for ideas with merit.

Another common discussion is whether there are too many clones.  Again, this is based on the assumption that the service that was needed was to fill in for the lack of published older games.  And once you have a viable stand-in why would you need another?  But Vornheim should be the beautiful burr under that saddle.  It isn't cloning anything.  It isn't even a system.  And surely everyone agrees Vornheim came out of the OSR.  What about Carcosa?  What about Lamentations of the Flame Princess?  It is certainly a system, but it just as certainly isn't cloning an old D&D.  Even if you limit your view of the highly polished, published products of the OSR they don't really fit the common narrative.

I guess the reason I wanted to make this post is that, while sure, there is truth in the story of the retroclones providing old school gamers with the game they loved when WotC wouldn't, it leaves out a lot of the best of what happened.  The open minded review of the old ways, the crazy innovation, the sharing, the punk rock ethos (we jammed econo!), was also the OSR.

But I also realized that these narratives are the result of people thinking about roleplaying much the way people think about writing.

Process vs. Products
In my day job I try to help people become better writers.  In that field there is the concept of Process vs. Products.  I'll spare you most the details, but the basic idea is that if you focus too much on the texts you're writing, you make it very hard to become better as a writer.  The most obvious reason is that if you write an unsatisfying text the way to make it more satisfying is probably not located in the particular sentences of that draft.  You really need to push the draft aside and explore the possibilities, the assumptions, the questions that aren't in that draft.  I don't know if this is because of Western Culture, a legacy of traditional teaching, or the fact that products are far easier to evaluate than how they were made, but all anyone ever sees are products.  I see this same thing with the OSR.

If you find someone talking about the OSR, its impact, its value, its achievements, invariably they will focus on published products like stepping stones across a stream.  The exciting thing about Secret Santicore was not making stuff for others or the surprise of what someone would make for you, it was the awesome pdf at the end of the process.  The awesome thing about Petty Gods is not riffing on an old school product, the bunches of kooky gods many different people come up with, or even the cool way the illustrators interpret these.  No, it is the book that will eventually be published.  And if the book is not published all those drawings, all those ideas, may as well have never existed.

But I'm not writing this just to lament the fact that people think of this all too commercially (Secret Santicore was free after all).  Product here doesn't mean something for sale so much as an object or artifact.  So many times on G+ I've seen someone pose a question that goes something like: "I want to run a game that is more Swords and Planet than Swords and Sorcery.  What system would be good for that?" or "I want to have a post-apocalyptic game with a strong element of survival horror, what system would be good for that?"  This assumes there are discreet systems that would fulfill every odd niche of a game a DM wanted to play.  And even if someone comes up with a decent answer to this question it assumes that's the best anyone can do. (People that ask "What makes for a good swords and planet game?" are framing it more in terms of process.)

When folks proudly advertise what system they're playing it always seems odd to me because the system I'm playing has drifted so far from where I started, it is hard to call it anything.  And to call it Telecanter's D&D wouldn't even be right because I make changes to it after almost every session.  My "system" is better thought of as my goals for a night of D&D and how I go about trying to do that.  Rules are just part of the equation.

And when people announce they are playing DCC or Tunnels & Trolls 2nd edition, or whatever, I always wonder, if I observed them DM, how much they would be bringing to the table from their own experience of gaming over the years?  How much of the "system" was all the things they'd had to figure out about making rulings, and improvving, and time management, and so on, but nowhere in the rule book?

I'm not saying System Doesn't Matter, because I think that is often ham-handedly used to justify that rules have no effect on play.  I'm saying you shouldn't be talking about systems as if they were cooked dishes, things that no one can change.  I'm saying that a large part of my OSR was realizing that "Hey, all these D&Ds do a really crappy job of handling wilderness travel" and not only feeling okay about telling people about it, but feeling empowered to fix it myself.  I didn't need to hunt for a system that had solved the problem or wait in breathless anticipation to see if D&D Next would do a better job of it.  I could do my best to fix it myself the way I thought Matt Finch had fixed descending armor class.

And isn't that what Vornheim was?  Zak saying "Hey all these D&Ds are crappy at running city adventures" and then doing his best to provide his solutions?

The OSR was more than a bunch of objects.  It was a feeling of power.  It was a license to create.  It was a conversation.  It was about examining our beliefs and revising them.  It was messy and recursive.  There was no end goal. 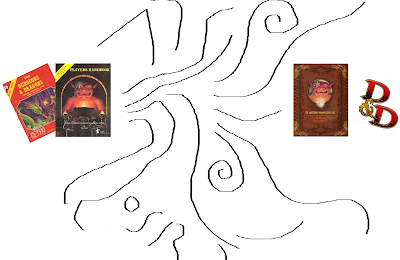 So, anyone writing about the history of the OSR that talks about Vornheim in terms of numbers sold or quality of printing — anyone who writes about the OSR as a timeline of products or systems like OSRIC or ACKs, — anyone who insists on framing discussion of the OSR in terms of WotC and decisions they made about what they would offer for sale, is missing, if not the real story, at least the whole story of the OSR.

They'll be missing my OSR.
Posted by Telecanter at 1:11 PM