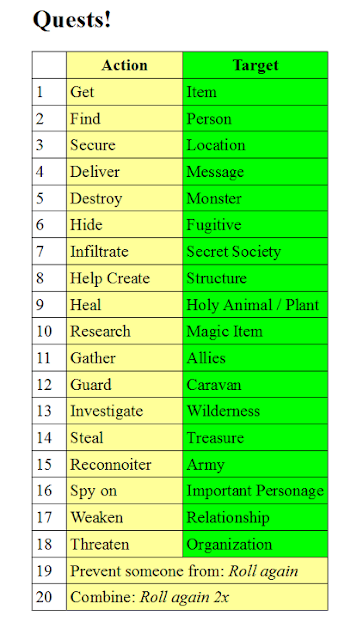 Daily OSR Fix is a newer blog with some cool posts.  I wanted to take this post about sidequests and try and kick it up a notch.  So rather than just 20 archetypal options in your chart you get those and the possibility of many more if you roll twice and mix and match the columns.  (We need a name for this kind of chart like: two-layer chart to steal from burrito nomenclature, or something)

I abstracted some of the verbs a bit so they might work better with multiple nouns.  So, "clear out monsters" became "secure a location."  I had to change "Explore" to "Investigate" for the same reason and left out the old "Escort" standby altogether.

Some of the actions are pretty similar, like "Spy on," "Reconnoiter," "Investigate," and "Research."  They have subtle differences that could still work.  I think of research as requiring books and resources, not necessarily the object of study itself while spying requires not just direct but surreptitious, observation, for example.  But if you can think of some alternative actions that might be a bit more distinct, please share.


There are some odd possible results. What does it mean to deliver a location?  Maybe acquire ownership and then hand it over to someone?  Maybe provide a way for someone to reach the location easily like magical travel?  What does get a relationship mean?  Maybe you have to get married or acquire a sponsor of some sort?  Ah well, this kind of chart will always require a little interpretation.
Posted by Telecanter at 5:46 PM