I whipped the clones back to work to bring you this special Insects (and Aliens) edition of silhouettes.  These are all in the public domain so use them as you wish.

I have always been fascinated with giant versions of insects as fantasy monsters.  Some of the larvae are so weird and vicious.  And I like how they are real things (if scaled up a little).

Back in the 90's when I had little hope of finding kindred gaming souls, I was working on making a solo gaming system for myself (my hexagonal geomorphs are part of this).  For a while, every morning with coffee, I would read an entomology textbook looking for possible monsters.

I think some of these I'm sharing today would make perfect alien races for your science fiction rpg.  Take our first contestant for instance, a larva of Cnemidotus caesus:

True Telecanter Insect Fact: I raised moths for the government at one point and knew how to tell the males and females apart. I was also quite proud that I improved the efficiency of their system so we produced almost twice as many eggs as before I was hired.

I don't remember what this one was but I thought it might serve as a carrion crawler:

This one looks too hard and bumpy to be a slithering tracker, but maybe a scuttling tracker:

This next feller is an aquatic beastie, an adult larva of Pelobius tardus:

I wouldn't want that thing crawling on the outside of my space ship.  Next, Termitogaster texana:

I've labelled these all "Larva" in the zip file so they are easier to find even if it isn't technically accurate.

True Telecanter Insect Fact #2: I worked for a mosquito abatement program for several years and during the many, many tedious hours of doing that got to see lots of weirdoid insects like mosquito larvae, velvet ants, and rat-tailed maggots.

Okay, now on to some more iconic insects, starting off with said mosquito (the origin of probably my favorite monster):

a second and spikier Caterpillar:

and this stylin' Cave Cricket:

True Telecanter Insect Fact #3: My grandparents raised bees (along with a lot of other things), so when I was a kid I was often running around playing near the hives with flying bees bouncing right off my chest.  I'm not really scared of bees and have never been stung.

Here, thanks to the Open Clip Art library, is a bee:

and also a Wasp (which I have been stung by, the bastards): 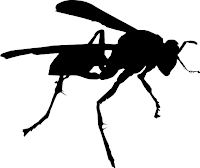 These have all been added as vector graphics to the zip file linked in my sidebar to the right.  I hope you all have a nice Thanksgiving.

Posted by Telecanter at 6:43 PM