Into the Coastal Caves 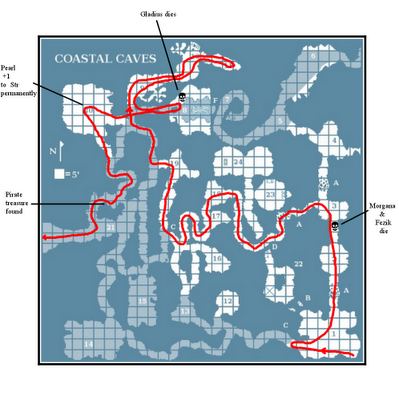 Six folks with incredibly low wisdom decided to explore the local spooky cave.  Entering the cave it smelled of old urine and unwashed humans.  Fezik poked around in some broken shelves and much chaos ensued as black centipedes raced out.  They were finally dispatched, including a powerful atomic elbow drop on one by Gladius.

The party started to take the left passage until they realized the water on the floor was getting deeper.  Heading right they encountered a passage so steep they had to use their hands to help them climb.

As they reached a less steep section carnivorous bats attacked.  Some dithering was made about whether Morgana and Pearl should cast sleep or not.  They decided to just duck and attack with staff respectively.  Walter scored a mighty blow cutting one in half and sending the rest to the ground.  For some reason the bats hated Fezik attacking him again and again, even after he splintered his shield they tore open his flesh.  Morgana soon followed.  Pearl decided to cast sleep.

Heading into an even smaller passage the party encounter a hole in the ground into a stale-aired space.  Having heard rumors of noxious fumes they were fearful.  Gladius shoved his bedroll into a hole before they found another and just moved on.

Several choices were made about which passages to take, usually the driest option was chosen.  The party found themselves in a cave with what looked like bodies in fetal positions encrusted in limestone.  They were fearful and left the bodies undisturbed.

On circling back into a room with a pool they were surprised by blind cave salamanders the size of small crocodiles.  It just so happened that the two torch bearers, Gladius and Pearl, were pulled under water extinguishing the light sources.

A desperate battle ensued.  Walter hurt the salamander holding Pearl enough that it fled.  But the beast that held Gladius was tougher and more stubborn and even as Sourpuss was systematically opening its gut with her dagger, it held on.  At last the survivors figured Gladius drowned and fled.

They encountered a dusty room with bison cave paintings.  Pearl eventually swept the dust away on the floor finding two hands painted there.  Placing her hands there she felt a surge of strength.  Sourpuss and Walter tried it to no effect.

A few more twists and turns and the last of the party found a little isle in a grotto covered in silver coins, two ruined chests, a huge skull with scrimshawed teeth and a rowboat.  Gathering all the coins they got in the luckily seaworthy boat and escaped out a passage to sea.

I had another session before this I didn't write up.  I'll include some lessons I learned from that so I don't lose them.

If you give a power for a one-off, make sure it is powerful enough to work in that one-off scenario, i.e. a vow to protect against blades when there are no enemies with blades isn't going to shine that session, telekinesis of a few pounds might be quite useful over the course of a campaign, but for a one off make it 200 pounds.

I still don't understand rumors or what they are for.  The party in this adventure were terrified of noxious fumes and the tide coming in, both of which were false rumors.  As the DM lying is the easiest thing to do.  So, did the relief that they weren't going to be killed by fumes merit the false rumor?  I don't know.

Notice the passage choices are almost all to take the driest route.

One player got really frustrated during the salamander fight.  I was trying to give the sense of the chaos of the bodies intertwining under water and counting off on my finger for them to choose actions, but that player got overwhelmed I think.  I suppose I could have gone easier, suggested some courses of actions to him, but I don't think there were a lot of good choices at that point.  He did save one of the drowners.

"Protection from Evil" is a dumb spell name.  Several players now have thought it would, you know protect them.  Finding out it just made it harder to get hit, and they wasted a spell slot on it led to unhappiness.  Note: this was usually as a second spell for exceptionally smart wizards, I almost always suggest they take Sleep.

Asking players what their spells look like is always frutiful and hilarious.

Funny relationships between characters is also gold.  I use a chart I edited down from JB's.  Two of the characters were parent and child this time.  The father leaving the son to drown.  Good stuff.

I made this map years ago.  As a DM that's run it, it sucks.  I wanted clearer markings of elevation change and water depth.  It was fun to make, but doesn't need all the dark ink either.

I tried to make it a sort of naturalistic place-- a living cave system with sections dry and "dead."  But I need to be careful, centipedes and bats don't seem that dangerous to players in the way a vomiter or man of wounds would be.

These folks want to play again.  I had a great time eating pizza, drinking adult beverages, and joking around with smart people.  This is a great game we have.
Posted by Telecanter at 6:55 PM