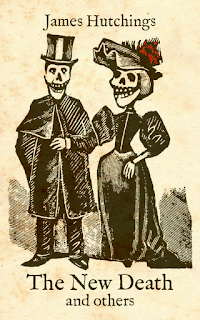 Many moons ago James Hutchings of Teleleli fame asked if I'd review his ebook The New Death and Others and I agreed.  Due to life and my own shortcomings it didn't happen.  Because of that and the fact that I'd seen a lot of OSR blogs review the book already by now, I asked James if I could interview him instead.  He graciously agreed:

Can you tell us about your history as a reader (I'm not asking about influences exactly, because I think even stuff we read and don't like can help shape us)?

The first writer I was a fan of was Enid Blyton. I don't know if she's very well-known in America but when I was young in Australia her books were pretty much everywhere, over ten years after they came out. She wrote books about idealised upper-class British children who either solve mysteries (the Famous Five and Secret Seven series) or have fantastical adventures (The Faraway Tree series). Actually she also wrote the Noddy books, about a little gnome of the same name, but I don't remember reading them.

Later I read the Narnia series, which has quite similar children in a more fully-realised fantasy world. I missed the frequent Christian allegories until I came back to them later in life.

I read a lot more science fiction than fantasy when I was a teenager. Fantasy was definitely less popular in general when I was young, although there were some popular series that were technically science fiction but had the atmosphere of fantasy, such as the Dragonriders of Pern series or the Saga of the Exiles. Lord of the Rings was the big exception, and in fact was more famous than any SF that I can think of. Any long book with a map in the front would have a back cover blurb claiming it was "a series to rival Lord of the Rings", not for example "a series to rival Dune."

I actually used to read a lot of comics. Apparently I got my mother to read them to me out loud when I was very little. DC definitely had a higher status than Marvel, and Superman and Batman were easily the most famous and popular superheroes. I also had the idea that Marvel was into making up this pseudo-mythology that I didn't really like or see the point of. In hindsight that might have been the influence of Jack Kirby.

So, now to the more traditional question about your influences as a writer.  I think you mentioned Dunsany, which I see.  The way you personify things like Fame and death reminds me of the poems of Stephen Crane, too. And some of your punning evokes Ogden Nash.  Were they an  influence?

Lord Dunsany definitely was, but I don't think I've ever read the other two (although having looked them up on wikipedia, I have heard the phrase 'Candy is dandy but liquor is quicker' which is by Ogden Nash). I might have been influenced by Dorothy Parker at times as well.

Dorothy Parker's great.  Could you talk more about Dunsany.  When did you first encounter his work?  What do you like about it?

When I was young I had a book called 'A Treasury of Fantasy', which was a collection of mostly public domain stories including 'The King of Elfland's Daughter' by Lord Dunsany. However I was way too young for it.

The first thing that I actually read and enjoyed of Lord Dunsany was 'Fifty-One Tales', specifically 'A Mistaken Identity'. I don't think I'd ever encountered the idea of characters representing ideas before (the main characters are Fame and Notoriety), or of stories that short (it's 80 words long). Many stories in 'The New Death and others' are very influenced by this story in particular.

Can you tell us a bit about your history as a gamer and DM?

I've probably spent more time playing gamebooks than I have playing face-to-face role-playing games. I think that's influenced my idea of how adventures should work.

In gamebooks the default expectation is that your character should die. Once you succeed there's limited enjoyment in going through the book again, so it's 'used up' as it were. Also gamebooks rarely have a system to allow your character to gain levels or even move from one adventure to another, so there's no 'high level play' that you're missing out on by killing almost every character. Even the Sorcery and Lone Wolf series, which were designed to form ongoing stories so that you could take the one character from book to book, are all playable individually (and probably were mostly played that way). Face-to-face role-playing adventures with the same level of danger are very rare.

I actually never really got into computer RPGs. I briefly played the original Bard's Tale, but in the end I found the 'grinding' as it would now be called pretty tedious. My problem with computer RPGs is that the parts of RPGs that are easiest to do in a computer programs tend to be the least interesting. Anyone can make a computer game where you generate a character, wander through a series of dungeons in a wilderness, and fight monsters from a wandering monster table. I actually think that gamebooks would be a better model for computer games (and I put this into practice with Age of Fable, which is at www.ageoffable.net in case anyone's interested). I suppose the old text adventures where you GO NORTH and GET KEY are sort of like this, but they've fallen by the wayside and in any case I found them quite frustrating (I'm not sure why I found them frustrating and not gamebooks. Perhaps because in text adventures you typically don't die, but simply run out of ideas and get stuck).

How about now?  Are you in a gaming group, running a campaign?

Yes, I'm currently running a game using a version of Mini-Six (which is in turn a version of the d6 rules, used for the original Star Wars and Ghostbusters games). I call my version of the rules the 'Pew-Pew system'. It's a science fiction setting.

I think a lot of your writing has a witty but maybe cynical humor to it.  I'm curious about how you balance tone in your writing and how much attention you pay it.

I didn't make any effort to balance these things in 'The New Death and others'. I just went with whatever ideas I had at the time. However I'm trying to do less humour now, based on feedback.

That last question was too vague; I didn't mean it as a criticism of the humor, but more about trying to get at tone in the sense of serious/hopeful/creepy/absurd.  I never gave James a follow-up question about this.

One thing I found interesting about your ebook is that it collects together many genres: short stories, prose poems, and poems of various sorts. I think dead tree books are generally much more homogenous in trying to find certain audiences.  The thinking being readers of fantasy stories might not be interested in poems and vice versa.  So, I  thought it would be interesting to ask who do you imagine your audience to be?  Or maybe a better question, who would you like your audience to be?

I don't think it's a case of printed books vs ebooks. I think it's me vs everyone else. From what I can see most people who write ebooks are very much writing in formats which are largely defined by books in print. Paranormal romance is very much 'books that are like Twilight' for example, and fantasy is very much 'books that are like Lord of the Rings', at least in format. Even fantasy that's consciously anti-Tolkien, like China Mieville and the His Dark Materials series, use the same format of long books in series.

Even short stories are unusual these days. There are certainly lots of magazines that run them, but in my experience it's rare for any of the many young people that run book blogs to even mention their existence. Flash fiction (stories of 1000 words or less) and poems are largely confined to literary fiction.

Going even further, I wouldn't be surprised if stand-alone novels become rare in the future, at least in genre fiction.

In using an unusual format, at least I'm standing out from the crowd. I've had several reviewers remark that they've never read a book like The New Death and Others, and mostly in a good way. However I've also had reviewers say they didn't read any of the poems because they're not into poems, or that they didn't like the mixture of tones.

Really I don't think that I have an unusual audience (either desired or actual) compared to other fantasy writers. I'm just trying to attract them in an unusual way.

While my favorites were the Teleleli-like stories, I found the variety refreshing maybe this something that is more possible with digital distribution.  Along the lines of the different genres, you've written some poems that translate existing stories by Howard and Lovecraft.  I don't know that I've ever seen that before.  Could you talk about that?

I was influenced by how it used to be pretty common to write poems based on the story of King Arthur (for example). Obviously I was also thinking of how there's an existing fan-base for both Lovecraft and Howard.

I read you are working on a Teleleli book.  I wonder if you've thought about publishing a sourcebook or gazetteer for OSR gamers.

Teleleli was originally meant to be a systemless sourcebook for role-playing games! However once I'd finished it, it turned out that people really wanted stats (and I've done enough business courses that I should have known to do the market research first). I didn't feel particularly enthusiastic about making up stats, and my ex suggested it would work better as a setting for stories.

Anything else you'd like to say to my blog readers?

I'd like to turn the spotlight away from myself for a moment, to talk about something more important.As you read this, there are literally thousands of people who are playing games where the Armour Class numbers go the wrong way. It is vital that they go the correct way, and therefore vital that we continue arguing about it!

You can download James' book on both Amazon and Smashwords:
Amazon: