I didn't call this post engineering monsters III because I realized you can use this to come up with spells or magic items too.

So, I thought more about factors in the game that we can work with for effects in-game.  I looked at the D&D combat sequence and even all the things on the character record sheet.

Here is an image, print it out and trace lines from one thing to another.  These lines can represent relationships between the factors not just for monsters but magic items, curses, spells etc. 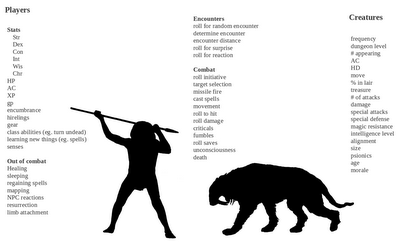 Some example ideas:
If you like this kind of approach to generating ideas I forgot I posted something along similar lines a while back.  It's about combining classes of things (trap/monster, trap/treasure for example) to generate new ideas.

Also in the same vein is me thinking about how little we have to effect player characters in-game.  I think I discovered some others because of the thinking I did for that post.
Posted by Telecanter at 12:00 PM