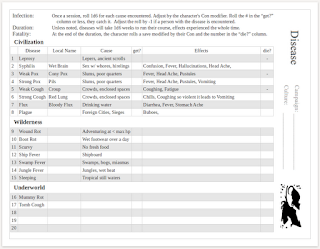 I found the One-Page Disease chart I'd been working on months ago.  I don't have the mental juice to finish it now.  I will later, but in the mean time thought I'd just give you what I have.  Here is a Word doc.

The idea was to try and capture the biggest archetypal diseases like leprosy and the plague without getting too scientific.  So, what having a disease entails is pretty straightforward for both players and DM, but the catching of them is still kind of spooky-- just being on a ship for a session means you have a chance of catching Ship Fever.

I also divided the diseases into categories because a) it seems like we tend to do that ourselves, treating some diseases as familiar threats to deal with around home and some as fearful exotic things, and b) felt it would help players better know when they might be at risk.

The symptoms are all picked from the standardized list here and try to all have some specific in-game mechanical effect.

What is lacking is symptoms for the diseases of the Wilderness and Underworld and the virulence and lethality numbers (which is really the hardest and most important part- and thus undone).

The disease section of Small But Vicious Dog by Chris Hogan was the starting point for this, so if handling disease interests you you might want to go take a look at his take.
Posted by Telecanter at 7:37 AM