These aren't "encounters" so much as the groups of people characters moving through a city might encounter.  They may be just passing examples of the bustling, populous nature of the city.  If players want to interact with them, or somehow get swept up in the thing these groups are doing, more might come of it.

I'll probably have players roll on this (and then help them interpret the results) every time them move from one place to another in the city.

Roll 3d10 and fill in one of the three possible "sentences" with the results: 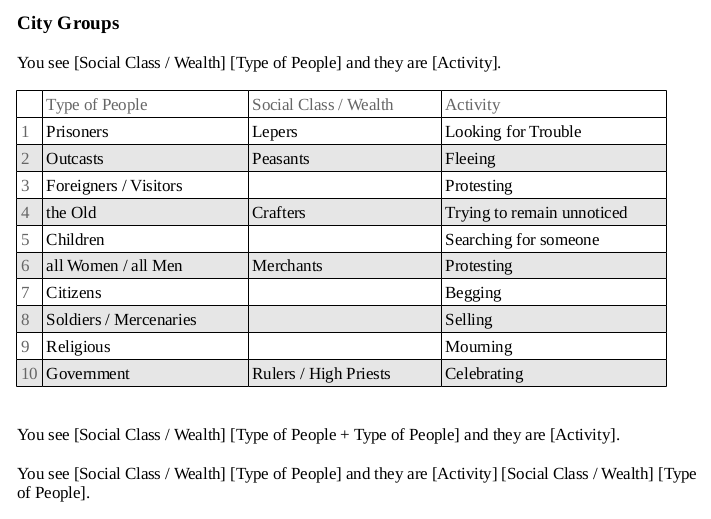 I've mashed social class and wealth together because, as an American, I'm less aware of class distinctions that aren't tied to cash.  You could make two columns if you want.

Entry #6 for Types of People is trying to get away from thinking that the default will be men.  In my world they will be a mix of genders.  So this result will signify that it is only men, only women, or maybe something different like a group of Hijra.

The second "sentence" is based on the idea that the Types of People categories are not  mutually exclusive.  In other words you might have a group of old soldiers or a group of foreign bureaucrats.

Let's try some for the first "sentence":

6, 2, 10
We could say it is a group of male peasants celebrating a sporting victory, carrying the best players on their shoulders.

5,7,3
Ooh, this is odd.  A group of wealthier children are protesting something.  Maybe pelting their tutor with vegetables?

A group is pouring from a church after someone noticed a child went missing.

Seems to work okay.  Any of those might turn into an adventure; the players find out about some sport they can try in a minigame, or at least bet on-- they might meet this put-upon tutor and befriend him/her-- the missing child might be an abduction by something dire.
Posted by Telecanter at 10:20 AM