I've had my players in this little sandbox for a while and needed a larger world outside of it.  I am not good at this because of indecisiveness and wanting to keep the infinite possibilities of an unwritten world as long as possible.  So finally I just asked my players to help.  I took a big piece of paper, cut it in four and asked them to draw some land. 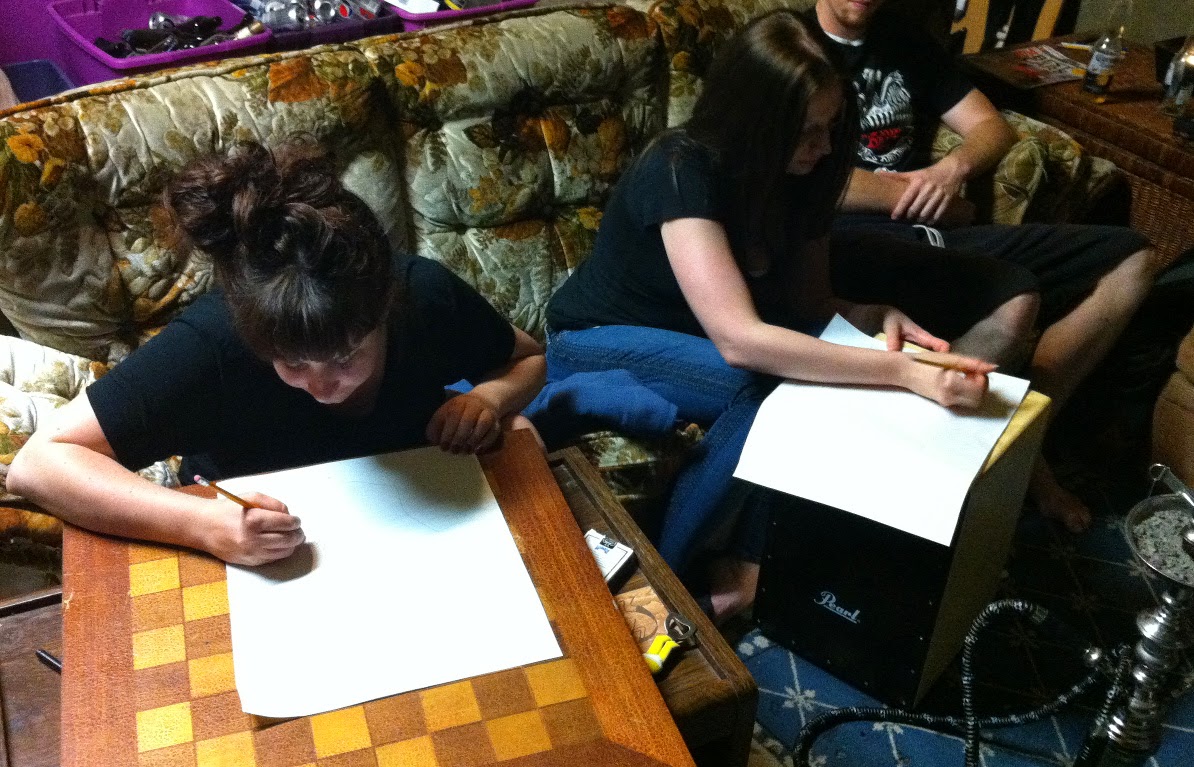 They asked me about scale.  I told them ,"yeah, I don't know, don't worry about it." 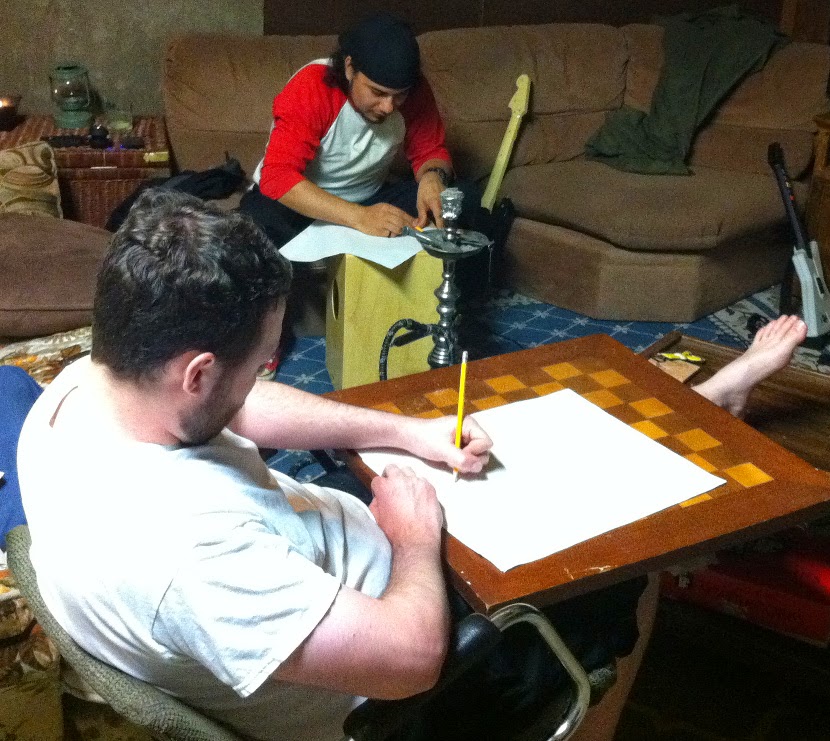 After each of them had drawn some territory I had them pass their maps to another person and draw places people might want to live.  They were adding more features than I had intended.  I just needed help with some geography and where cities would be located but they were putting strange portals, ghosts, cave entrances, etc. So I took there maps home and treated them as if they were folk maps, I mean that I made the scale much larger than their images seemed to show, because I wanted more than just four little sandboxes. 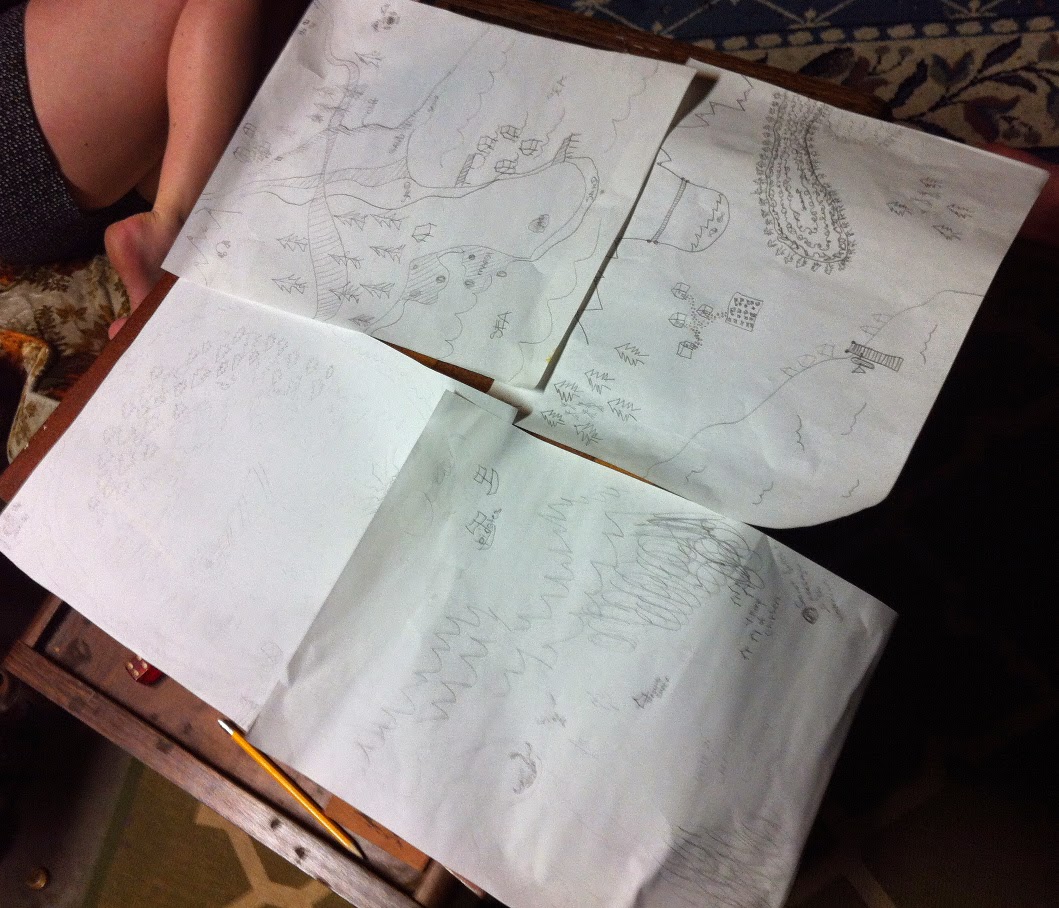 I traced the major features and tried to interpret some of them.  Nicely enough, they had included some swamp, coastal marshes, mountains, forests and deserts, so there was geographic variety.  There was also ocean on a few of the maps that I interpreted as a central sea.  Here is what is what my interpretation looks like: 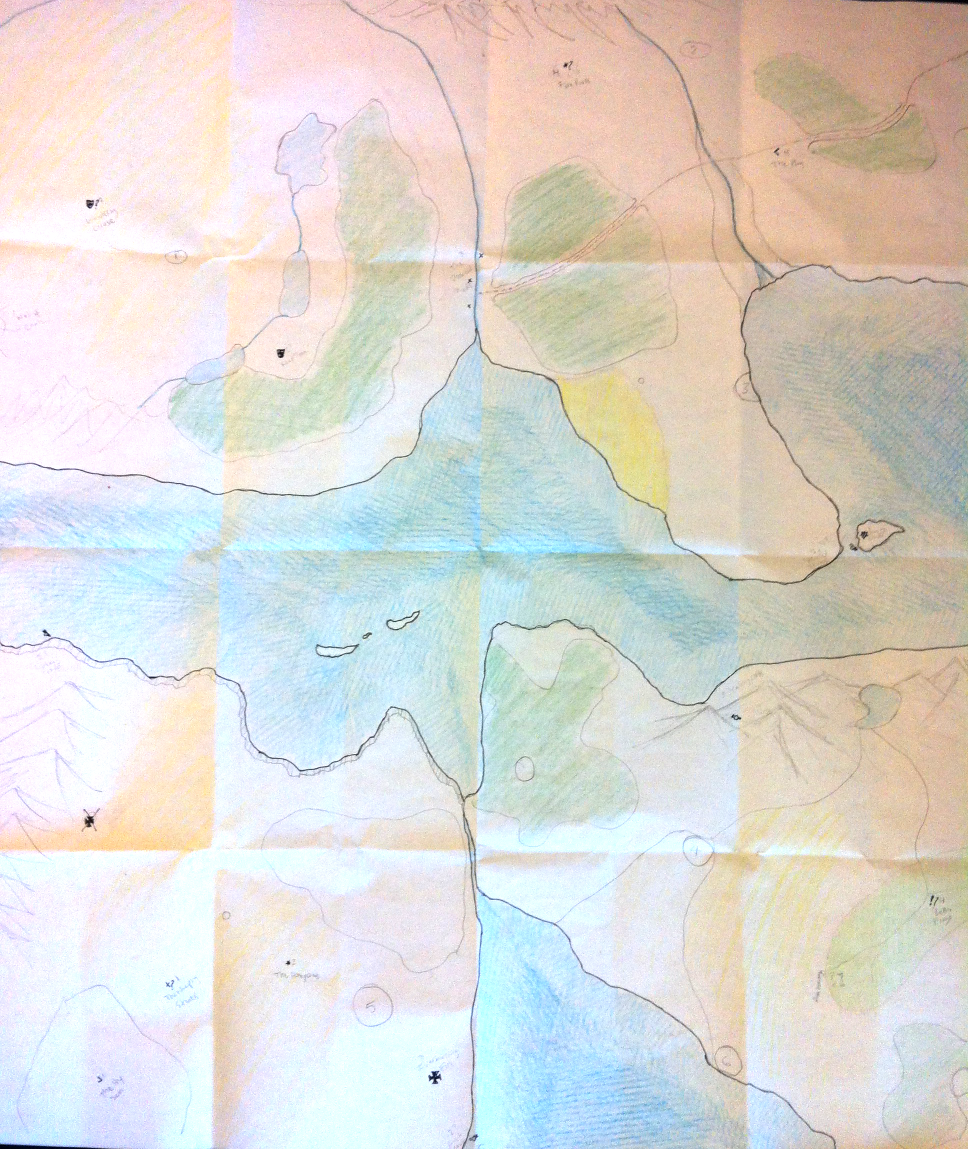 The scale is about 30 miles to the inch.  Don't know how realistic or game efficient that is but it seems good enough.

Putting it into Play
That took me about 2 weeks to get around to doing.  Then this Friday was one of my players birthday.  He asked if we could play using the map they had drawn parts of.  So I wracked my brain for a way to try and have a session that might tie into this newly made landscape.  I finally decided it might be fun to just give the some free mobility like I talked about in this post.  So I basically gave them a hot air balloon.  It is called the Wicker Tower, has an encumbrance limit and a magical stove that uses meat as fuel (so they have to land every now and then to hunt). 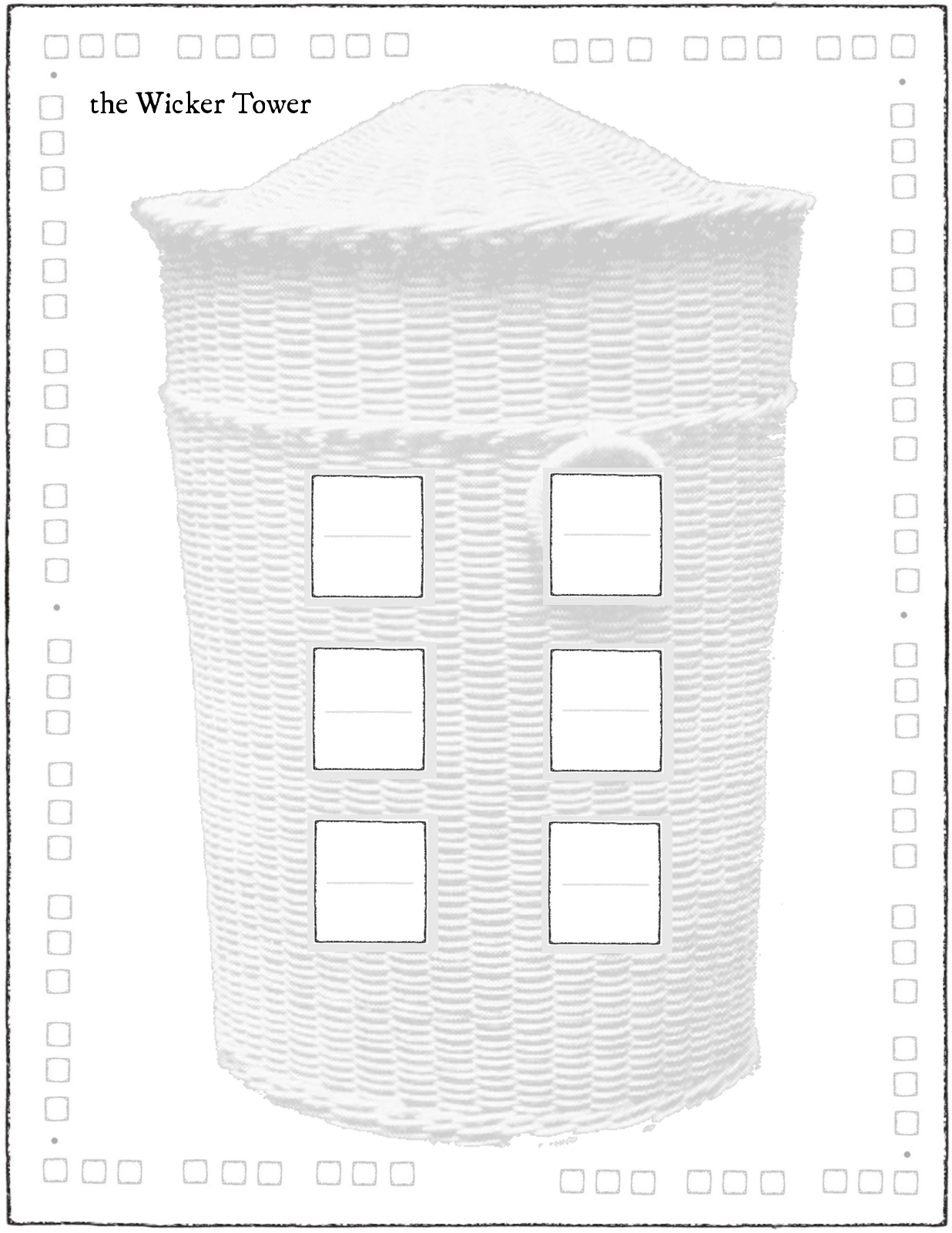 I used the elephant encumbrance sheet I had lying around.  It is 20' tall and 15' in diameter.  The boxes along the edge are hit points.  The six boxes in the middle represent the weight of one person and all their gear or the equivalent.  My players thought I did this explicitly to strip them of their hirelings (no, just trying to make them have to make choices, I'd actually forgotten how many total hirelings this party had).

Geographic Wonders in the World
On the wicker tower they found a corpse with some pages from a book and the map above.  I've been wanting to try Beedo's awesome idea of the Library of de la Torre for a long time.  Unfortunately I don't have all the cool rumors, dungeon locations, etc. that it requires, but I did have a bunch of wonders written up that hopefully might seem interesting enough to visit.  So that's what was on the pages, a selection of my wonders that worked well with some of the features my players had included. 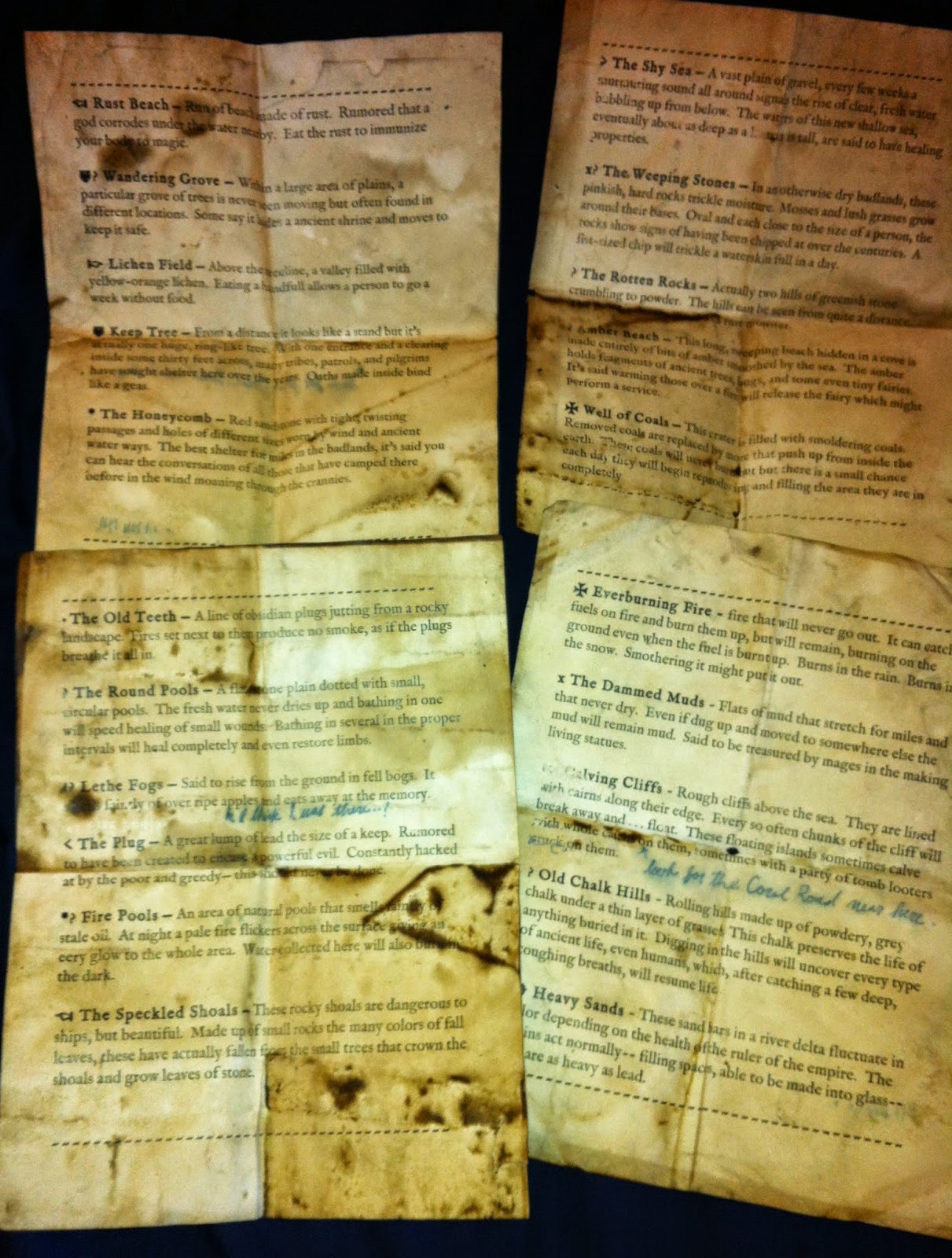 I always have fun making physical game props.  For this I used the cool font mentioned in this post.  I printed them on heavy paper, folded them, soaked them in coffee and then dried them in the oven.  Each entry has a symbol next to it that corresponds to a place on the map.  Though some share the same symbol, so it can be unclear which wonder is at one of a few locations.  Some also have question marks because the location may be uncertain.

Cities and their Rulers
Okay, so I brought those things but I also asked them to do a bit more collaborative work on game night.  I had picked 6 locations from their maps to represent big cities and had them roll up stats for the cities as in this post of Zak's.  I still have to interpret all the results, there was actually an 18 for trade for the city nearest the party, so they were excited about that and are heading there next.  Then I had them all roll up characteristics of the leaders of each of these cities using my hireling trait chart.  Again, I need to digest that a bit but there were some promising results.

Balloon Flying Mini-game
One other thing I did, was try to see if it were fun or interesting to try a mini-game that you don't know the rules to.  I was trying to mimic the process of learning a skill in real life.  The balloon the players wanted to fly had four sets of pullies.  I gave four players a d4, d6, and d8.  They had to secretly roll the three and choose one as their result.  Then I would look at all those and tell them which direction the balloon was going.  Then they would roll again and try to direct it where they wanted, but they could only say "higher" or "lower" to each other.  The idea was that they had to figure out which pattern made the balloon go in a particular direction, then manage that pattern without communicating to much.  It was okay, nothing spectacular.  I intend to forget about it once they get a hang of flying in a wind, then we'll all assume they've learned to work it reliably.

In the end, it was a pretty fun way to make a fantasy landscape and then put it into play.  Now I need to go look at Vornheim again and come up with a map for this city they are going to.
Posted by Telecanter at 12:51 PM