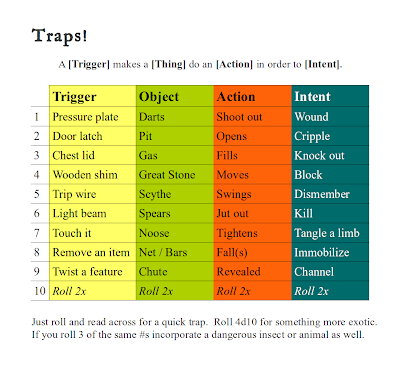 Here's my take on a trap chart in the Roger the GS style.  If you read straight across you get a standard trap that should be easy to work with even at the last moment in play.  If you mix and match the columns you get weird stuff you need to interpret a bit and is intended more for pre-play prep.

A few notes.  If you are rolling to get something weird you can still get the straight-across result.  Rather than re-roll I put in to add insects or animals to get some Indiana Jones style snake pits or bug filled rooms.  The trigger column was the last thing I added and the fact that some are nouns and some verbs bugs me, but it should work.  For the chute being "revealed" I was thinking of staircases that flatten out, the chute was always there built into the feature itself.

Let's roll some and see how we might interpret them:

4, 3, 5, 4
shim, gas, swings, block
Whew, that's a tough one on the first go.  Okay, let's say a section of a hallway is a big pendulum.  Knocking out a wooden shim will cause it to swing, replacing the current section of hall.  It contains a gas that is heavier than air and makes anything in it float to the ceiling and get stuck.

2, 7, 10, 9
latch, noose, (shoot out, open), channel
Hmm, okay, a chamber with four doors.  Opening the "wrong" door causes a noose to shoot out and land around the opener's neck and start, slowly, constricting.  Opening the door the designer wants you to go through causes the noose to go slack.

7, 1, 6, 1
touch, darts, jut out, wound
This one seems pretty straight forward.  The walls of an area are lined with tiny, sharp points.  Brushing up against them causes them to jut out and inflict damage.  I would say battles in the area would be at a negative because the battlers are being careful not to touch the walls.  Or maybe roll a save every time you miss to see if you've bumped into a wall.

Well, you get the picture.  Let me know if you have any suggestions or questions.  Hope this helps in designing your dungeons.

Posted by Telecanter at 8:24 AM