The post on my blog that gets the most traffic by far is on village maps.  What that says to me is that there is an unmet need for village maps to be used in dungeons and dragons.  The sad thing is, that post of mine is about me wanting village maps too, so anyone hitting it looking for a map before Friday night's game is going to be disappointed.  Let's rectify that.  I'll show you an easy way to generate village maps and then give you a couple.

As with most good ideas this is just a mash up of great ideas by other people.  Take roads shaped like letters and dice tossed to represent village inhabitants and we're off (I'm simplifying 1d30's approach a bit).

So, first step, draw a road shaped like a letter.  Here's C:

Trace them and record the pips in the traced squares.  If it looks too skimpy toss some more:

I want my villages to be a little more medieval so they are mostly subsistence farmers in huts with few of any other type of building.  But they will have churches, tithe barns to store the crops they owe the feudal lord and maybe a manor house for a reeve to live.  I tossed some dice to represent those buildings:

And that all gives you an organic-looking village like this: 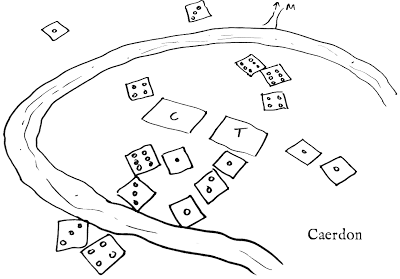 By using alphabetical village names, you'll never forget what the general layout of a village is.  You can have sets of names ready for different cultures and use their geographic meanings to help.  Caerdon, in our example, means "hill fort" so I can make its road run around a central hill.  The Church and Tithe barn are some of the oldest buildings and also at the highest elevation.

By making the pips represent people we can see at a glance the population of a village.  We can use some simple guidelines to figure out some other useful information.

Defenders
If we say two pips is a married couple, any number after that can be their children.  We can make things easy and say only one spouse from any household is combat-ready and children don't fight.  But, large families will have older children that can help defend the village.  So +1 for every die, +1 for any 5s and +2 for any 6s gives us a plausible count for who can bear arms in the village.  For Caerdon that gives us 16 (+1 for each die) +6 (no 5s but we have three 6s) for a total of 22 peasants to raise if orcs attack or PCs start setting things on fire.

Provisions
If you are leaning more medieval and don't have shops, you may need to determine "Can players get food for themselves here?"  An easy way to figure this is to suppose single pip households have extra food and that for each they can provide rations for one person for one day.  (Single pips could also be the elderly and infirm, but with the bigger families I think it will all average out and we're trying to keep things simple).  So for Caerdon, there are 6 single pip households, food and drink would be available for 6 dungeoneers if they have something worth trading.

Other Buildings
Villages might have a blacksmith to make tools and if they're by a waterway they might have a mill to grind their grain.  Some villages might not have these buildings and will have to cart their grain to a nearby neighbor to grind it.  If you want a simple way to see if this particular village has one or the other without having to add more steps or extra dice you could say: "If two adjacent huts are the same number, one is a blacksmith."  For Caerdon, with two 6's and two 1's, that's a yes.  Alternatively, you could make it two adjacent odd numbers or adjacent even numbers, whatever helps you get the village done and feeling real for you.

Size
Obviously the more dice you throw the bigger the population.  I was rolling 8d6 just because it works well for tossing them.  Then, if it looked sparse I rolled more.  I think once you get up around 20d6 on a single page of paper things will be getting cramped.  If you want bigger villages, just add another piece of paper.  You could do it lengthwise to make a long village that follows a road or waterway or make a square.  A square of four pages with the density of dice I was using on each, will get you to populations that would probably be hitting the upper bounds of "village" and start moving into "town."

Here are two other villages I whipped up, Ashborough: 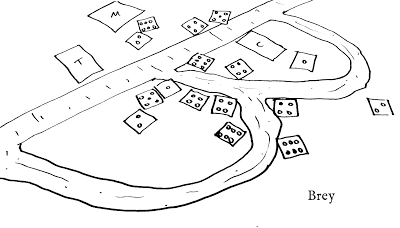 The forms of the letters and random layout of the huts can give you lots of ideas for what the village does or its history.  You can see, for Brey, I decided that the back of the "b" was a bigger, older road.  The lower loop is a little sparse in huts, but maybe it's a village green.  Maybe this village gathers livestock there before driving them to market.

I made Ashborough's central stroke a road, but it could have easily been a waterway with the village straddling it.  In fact, I was thinking of making all the vowels in my village alphabet explicitly on waterways.  That's fewer than normal probably, but it's easy for me to remember.  Here, have a second version of Ashborough: 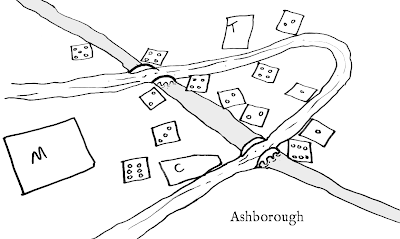 I apologize for the crappy psuedo-isometric view.

Well, there you have it.  It's quick and simple, but I think it will help me populate my world with at least 26 villages that look distinct and have an organic feel to them with some history implied.  Hope this helps.  And if you want to come up with 26 village names in a different culture to share, link them in the comments.
Posted by Telecanter at 10:35 AM