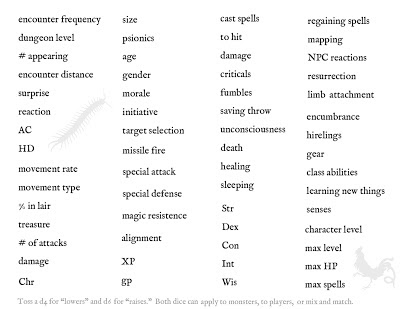 Have a chart meant to generate new and interesting mechanics for  monsters.  It's revisiting something I've blogged before here, here, and here.  I basically took Roger's suggestion and made it a dice drop chart.

Some problems: first, I suggest up/down for player/monster and monster/player relations between the game system factors listed but you might want other relationships like mimic, or reflect, or something.

Second, I keep getting the ones in the middle and it wasn't engineered for that purpose, all things could potentially interesting.  I guess the only way to get around it is to have some kind of abulafia thing that randomizes the sheet before you print it.

But, I did come up with a monster that's chance to hit you is lowered if you're healing (read, wounded) and a monster that gives you psionic powers if it critically misses~~ how cool is that!?

Try it out and let me know if you come up with something cool.
Posted by Telecanter at 4:06 PM