Praise for a Subsystem of 1e AD&D 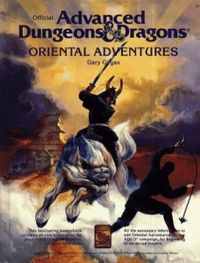 I don't remember first edition AD&D being big on giving DMs tools to make things themselves.  There was the DMG's random demon generator (creatures from the lower planes, actually), the random dungeon generator, and the system for determining artifact powers (which was a bit of genius).  Mostly the game seemed more concerned with defining things in the universe of AD&D than helping you make your own. That's why Oriental Adventures' martial arts system surprised and pleased me so much.

It came at the tail end of 1e and corresponded with a break I took from gaming, so I never got to use it in play, but it's so beautifully modular, it makes me want to give pcs martial arts now, just to try it out.  Basically, all you have to do is keep track of the number of attacks per round, the AC a style gives you, the damage of a typical strike, a small assortment of special maneuvers that can be learned, and you're done.

Better than that, the book took the attitude that DM's would want to create their own, so it only gave you stats for four real world styles (Karate, Kung-fu, Tae Kwon Do, Jujutsu) and a little table to help you create new ones.  By picking whether a style is "hard," "soft" or in between, you can determine the rest of the necessary details.

The special maneuvers are broken up into 9 categories:
None of these categories have more than 6, and most have just 3 special maneuvers.  The system has the clever addition that moves can only be learned in order of difficulty-- so you can't jump to a powerful 3 strike, until you've learned all the styles 1 and 2 ranked moves (or every category).  Combining this with the fact that you use proficiency slots to learn maneuvers, there's a minimum level most players will need to do devestating moves.

Now, some criticisms.  I would skip the unneeded proficiency step and just say you can learn some number of maneuvers each level.  That's not a big change, but would simplify things (especially since I'm not using proficiency slots for anything else).  My main criticism is that most of the maneuvers are boring to me.  The usual strategy is a higher number means more damage with usually no sacrifice.  That means by the second level of strike you're already doing as much damage as a 2-handed sword multiple times a round with your hands.

I'd want to play around so that maneuvers would be useful but also choices for players (there are a few of these in the system, but only a few). I'd also like to see if I could limit the moves to around four for each category-- to simplify a little bit.

And I'd like to make a one page summary with some generic styles already built.  For example, a hard striking style, a throwing style, a submission style, etc.  These could be re-named or combined as needed (I find it helpful to have a bare minimum already constructed that cool exotic stuff can be derived from).

Oh, yeah, another cool part of this system was that a player that learned multiple styles could make their own style mixing and matching parts from each.  I thought that was pretty sweet.  I'm not sure which of the several folks credited with the OA book designed the martial arts system, but I say good work.  I hope to produce my own little tweaks before year's end.  Hope you are all well.