I've mentioned a few times in the past that I'd like to make some kind of mini-game for shopping.  My players engage in a lot of what we jokingly call Shopping & Dragons.  Because they're in a city and I've used a fad table that changes fashionable things to wear from week to week and because they like to buy things for their schemes, they are often shopping.  Oh, and the city they are in, Ulminster, is pretty mercantile and has a Mile-Long Market as a landmark.  So shopping is something that is going to happen.  But I wish it were more fun, more game-like.

Last night as I was trying to fall asleep I had an idea of how to do this simply: have a roll-all-the-dice type table but let players choose which die to apply to which column.  That would mean there is luck involved but also player choice.  To have a cost of rolling again and again, each roll on the table is 1d4 hours of searching markets and shops. 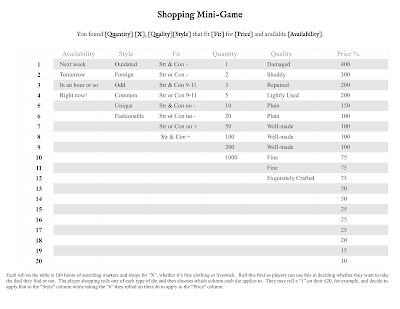 This is a first draft and I haven't tried it in play.  The worst possible outcome is probably having to wait a week for something, or needing something so badly you would settle for 4x the price.

I wanted there to be the element of clothes not being the right fit and I thought Strength and Constitution might be a suitable stand-in for this.  If players have minuses on those stats it's more likely they might be slight, if they have bonuses they could be considered burly or tall.  I don't know how this applies to buying non-clothing gear.  Can ropes and 10' poles be of different, awkward sizes?  Maybe just ignore this column when buying gear, that would give players an extra die to choose from, meaning non-apparel is easier to acquire or at least more standard when found.

Another thing I was thinking, a player might apply a roll that exceeds a column's maximum to get their choice of the results in that column.  That way a player can "throw away" a high score for certainty of fit or quality.

Here is the table in an editable form.

Of course you will still need a set of simple, well-organized price lists.  My buddy and I started on that, organizing them by material the items are made of so we might hook in trading or world event effects later, with embargoes making prices on all cloth goods go up, say, or metal goods becoming cheaper when a new mine is opened.
Posted by Telecanter at 9:22 AM