Yeah, not the one you're thinking of.  I saw a Sinbad movie long ago (when I was 10? earlier?) and it has always stayed with me.  It was hard for me to find because I would re-watch all the Harryhausen pics thinking it was one of them, and they are all good and I remember them too.  But the one that stuck most was the German production Captain Sinbad. 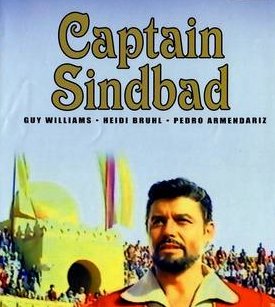 I think it pretty much epitomizes D&D for me, especially the last 25 minutes.

To start you have a film ostensibly about Sinbad and the Middle East, but really that's only an excuse to have lavish costumes and fantastic events.  I mean the villain, El Carim, looks like a Hun with a sheepskin vest.  And his name, is he from Spain?  Sinbad fights in a full-blown gladiatorial arena!  What era is this?

As Sinbad and his crew attempt to reach a tower that holds the key to El Carim's power they struggle through a weird amalgam of jungle/swamp.  There are crocodiles and strangling vines, screaming monkeys and whirlpool-suck-holes.  The conflation of the exotic terrain is similar to the conflation of decorations and clothes from many different cultures considered exotic.

It's basically something the Academy calls Orientalism.  Folks in the West see cultures to the east of them as exotic, sexual, indolent, brutal, etc.  You basically project your own ideas onto a place you find foreign.  Even though that place has thousands of years of culture and probably considers your own culture strange.  And then you use those ideas to justify colonization, exploitation, and war.

Anyway, I didn't mean for this to be an essay on Orientalism in D&D which is something I'm very wary of and try to guard against, but is also, I think, at the root of D&D (It's the pseudo in pseudo-medieval and pseudo-middle eastern that even makes it possible-- adventures in a fantastic world that never existed.  And exotic means new and interesting to you even if it's old hat to someone of another culture).  I mostly wanted to point out a root source for my own conception of D&D.

Watch the last 25 minutes if you can, see the hirelings drop like flies.  Watch the crazy guardian Sinbad has to fight at the end in all its Rientsian glory.  See the villain immune to all harm unless a fairy tale-like condition is fulfilled.
Posted by Telecanter at 9:34 AM