What are the Monsters Doing?

So, If we put a relatively small number of creatures that can be randomly encountered in a particular area it will give it a flavor, a sense of verisimilitude.  But then you get to the point where your players are groaning "Ugh, not skunkbats again!"  So after one or two random encounters rolled for the same creature type roll on the following chart to add something interesting to the encounter: 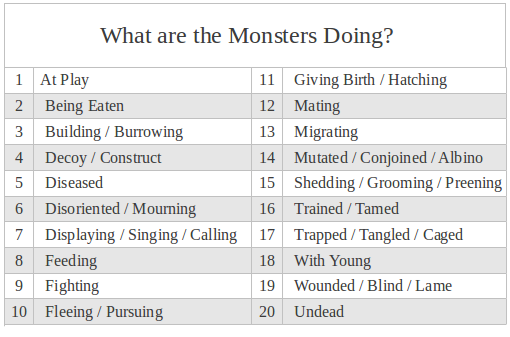 Okay, some of those are not actions but states of being (trained, diseased) but you get the idea.  I wouldn't make this mean the encounter is necessarily harmless, just distracted perhaps.  And if you start taking pot shots at them it turns into your typical skunkbat strafing run.

Also, it may seem this is skewed towards simulationist creatures, but I think you could get some real weird stuff if you try to make it work.  Here are some notes and ideas:

At Play
Because you know you play D&D to imagine young beholders frolicking.

Decoy / Construct
It isn't a real skunkbat after all, someone must be hunting them.  Or it's a mechanical wonder.  If you catch it might be worth a lot.

Disoriented / Mourning
Like dolphins beaching themselves, sometimes gelatinous cubes will push themselves into the acid pools.  Or maybe it's a sabretooth lying on its dead, giant master's chest

Displaying / Singing / Calling
What would the display of a gelatinous cube be?  Iridescent colors playing across its surface?  Or maybe it fluctuates between sphere, cube, and toroid shapes.

Fighting
Like mountain goats butting each other for superiority ( or flailsnails!), or maybe like crows mobbing a hawk.  You really wanted to see a dragon, right? Well, these skunkbats are trying to drive one off.

Giving Birth / Hatching
Okay, no, you play D&D to experience the miracle of beholders being born.  Happening daily this season at the beholder calving caves.

Migrating
Ever heard of migrating tarantulas? How about grunion runs? See, these particular gelatinous cubes aren't interested in eating you, they're just trying to get up-dungeon like transparent, cubic salmon. Multiply the number encountered by 10.

Trained / Tamed
Wearing collars or ribbons, these things could be worth money, or it could mean their masters are nearby.  Maybe someone uses stirge like hunting falcons.  Also, can you train a gelatinous cube?

Undead
Same creature except it's an undead version.  What is an undead gelatinous cube?  Maybe it's got a yellowish tinge to it and is extra rubbery (read more hd)
Posted by Telecanter at 10:35 AM