First, I never mentioned that I would consider any kind of road or known track to be civilization and by using them players can avoid these mini-games.  I intend these for going off-road or trailblazing.  I suppose that could lead to boring trips along roads in the wilderness, but I'm thinking we should probably all have charts for terrain-specific road encounters and travel on a road should feel quicker anyway. I imagine hand-waving road trips would be less of an issue than whole expeditions through difficult terrain.

Second, obviously these don't have to be used for the terrain they are named for.  If you have a different terrain that you want to keep interesting as players travel across it, choose the mini-game that fits it best.  So far we have terrains that:

and today I'll give you:

Now, the jungle.  I had a hard time with this one.  While I knew that I wanted something like I remember from watching old Sinbad and Tarzan movies-- porters and bearers dying every step of an expedition into the dark jungle-- I didn't want to interfere with the game's system of playing out dangerous encounters and combat.  I'm hoping this might balance both well enough: 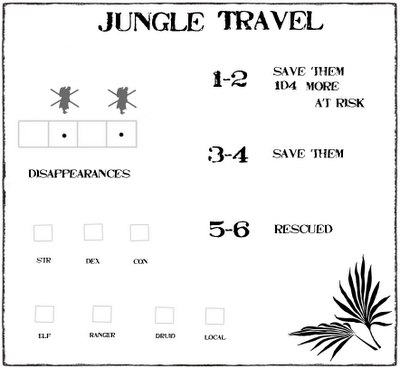 The idea is the jungle devours men and women-- quicksand, silent constrictors, piranha filled streams.  Every other day one hireling will disappear.  Having any of the special folks at the bottom of the chart in the party can save one hireling per journey.

Once per journey, a character with an exceptional strength, dexterity, or constitution can prevent a disappearance.

Otherwise the party must leave the hirelings to the jungle or challenge this cruel fate by rolling a d6.  A result of 5-6 means crisis averted-- you grabbed the hireling's hand just as they were about to slip off the cliff trail. A result of 3-4 means the scene becomes a full-blown encounter-- determine what the hazard is, whether environmental or wandering monster, and play it out.  A result of 1-2 means the scene becomes a traditional encounter as well, but you've escalated the danger of the situation-- 1d4 additional hirelings are knocked into the quicksand, are encoiled by the giant anaconda, etc.

I'm hoping that players that really don't want to lose hirelings can avoid it, but that in tense situations, chases or parties lost in the jungle, they may just let hirelings go to avoid losing even more hands to the wilderness.
Posted by Telecanter at 9:35 AM