Here's a pro-tip for you rules system designers, try explaining your rule to a drunk.  Last Friday, one of my players decided he wanted to try a cleric to mix up the fighter brigade.  He'd been imbibing before I even arrived.  And I had to explain my cleric petition rules about five times.  Now, I'm not saying all rules should be so simple that buzzed folks understand them, but the multiple attempts at explaining how my petition rules work certainly forced me to think of them holistically and from every angle.   I've never really been satisfied with them anyway.  The difficulty is that I've wanted to incorporate diminishing returns for asking for miracles over and over and for asking for miracles of more and more power.  I've found it hard to be simple and work with both axes.  Here's another attempt: 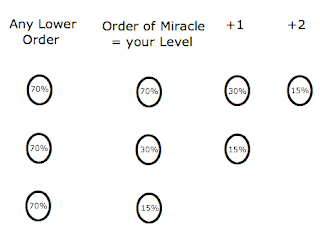 I'll give a cleric 3 glass beads and this little chart. They can put their bead anywhere they want but only three times. Any miracles of an order below their level will work 70% of the time.  I think I'll give them 3 more beads at 4th and then again at 8th level. I also give permanent miraculous powers to these holy people at those levels (think halos, healing touch that works 100% but limited times per day etc.)  This is weaker than a traditional cleric, but maybe not too much.  An 8th level cleric in S&W Core has 10 spells, and my cleric will only have 9 and then no guarantee they will work.  But then, my clerics could choose to use 4 6th level spells at 70% where the S&W cleric can't even cast that level spell at all.  So I guess what I'm trying to do is inject power and uncertainty; if the entities you're petitioning listen, a cleric in my world can do powerful things, but you can never be so prideful to expect things to happen for you.
Posted by Telecanter at 9:44 AM