I don't mean tumbling in the sense of rolling down an infinite hill (I'll leave that for someone else to explore), but turning through the vertical plane; "rotating" and "revolving" make me think more of movement in the horizontal plane. 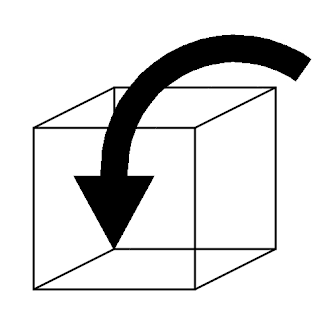 A horizontally rotating dungeon seems to be more about trickery-- the puzzlement of identical rooms being switched out as a means to confound players.  I'm more interested in the dungeon already explored becoming an alien place by being turned-- in essence extending the exploration of the same place by making it new with each rotation.  Well, that and just the wonderment of a huge turning place.

The Rotation
Going along with the idea of extending exploration, I think a tumbling dungeon should turn 1) slow enough so that it isn't trap-like and dangerous to explorers, 2) at predictable intervals, 3) at intervals far enough apart that explorers have enough time to explore each turned state.  The last point will depend on the size of the dungeon, but I'm thinking 1-2 hours between rotations at least.  And this is really important because it places a practical limit on the size of our dungeon.

Dungeon Size
My first sketch of a possible tumbling dungeon was a cube of 5 rooms by 5 rooms.  I quickly found out it would be extremely difficult to not only represent this visually, but for players to form a mental mindscape of it while exploring.

So, I reduced it to a cube of 2 rooms by 2 rooms.  Still too complex.  I think tumbling dungeons of this size might work in a video game, but I want something simpler.  I think it should be just complex enough for a player to hold in their mind while providing interesting things to investigate on each rotation.  The perfect size would also allow for at least one rotation to happen during a session of play-- otherwise memory and player churn will become a problem. Remember, a cube rotating will have 4 states, so you'll multiply the number of dungeon chambers by four (and then need to design those rooms).  I'm thinking a dungeon with four rooms and four passages might be just about right for me.

Building Blocks
As far as I can tell there are four classes of elements that will come into play in a tumbling dungeon:
All of these can function to, not just change the look of a room but hide and reveal features and channel travel by making areas traversable or not.

Gravity
If this place is a feature that has existed for a while, then it will most likely be sparsely decorated and with the building blocks above.  Anything loose would have been tumbled to bits.  So any treasure items will have to be ingeniously secured.

I like the idea of magic producing anti-gravity effects which the tumbling dungeon can't, and thus I would reserve magic for that effect and keep my tumbling dungeon a physical apparatus turning with huge gears or pivots somewhere in a cavernous void.  But using magic to shift gravitational direction would yield essentially identical results as having the dungeon actually physically turning.  So, it's really up to your preference as a DM.

Misc. Thoughts
The first rotation after entering should probably block the entrance the party came in by, forcing some exploration of this strange place.

I think it would be a bonus if it isn't obvious at first that this dungeon rotates, i.e. no chairs on the ceiling.  hat way you get a little extra surprise from players on that first rotation.

For those of you that have a simulationist streak that's wondering why the hell someone would build a place like this, two ideas: an alchemical formula that needs blending for a 1000 years, eldritch eggs that need a source of heat evenly applied to keep them viable.

I can't do a post about rotating dungeons without directing you to Grim's idea of using a Rubik's Cube to generate dungeons with geomorphs, and Norman Harman's further exploration of the idea along with a proof of concept.  Awesome, but it seemed more about generating the dungeon on the surface of the cube than experiencing the effects of those rooms moving through three dimensional space.  Of course, all the ideas above could be applied to a Rubik's Cube dungeon, although I think Norman, like me, found it to be quite difficult to map and represent to players.
Posted by Telecanter at 10:53 AM