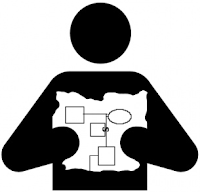 The pre-mapped dungeon has come up a few times in conversations on this blog.  I think one place was regarding heists and the other was involving tactile maps.  I thought of it again in regards to hobo signs and cadger maps (more on those later).  I thought it might be good to think a little about what qualities a pre-mapped dungeon would have that are different than the normal unknown dungeon.  What I'm talking about here is when players receive a map of a dungeon with rooms, traps, and creatures marked on it.

Dealing with dangers you expect lends more of a fairy tale quality to this kind of dungeon.  Knowing there is a roper in a cave you must pass through means you can try to plan for how to neutralize it.  You have to decide what items to bring.  You might perform several side-quests to acquire items and people you'll need to succeed.  Maybe the Flute of Resting will put the roper to sleep, but it's in the Grove of Sighs . . .

Because the point is planning, I think it would be very frustrating for the map of a dungeon to be deceptive.  If, for example, it says "no traps here" on a corridor and you, as DM, decide a new kobold tribe has filled that corridor with traps.  Well, that kinda sucks.  Because you've taken away both the fun of discovering a new place and undermined the player's ability to strategize.  (Also, anything that would make the players want to ignore their map seems counterproductive if you're going to got to the trouble of giving them one)

It could be interesting if players knew that the map they'd been given of a particular dungeon was intentionally false.  They would still be able to strategize, just everything becomes more complicated.  Is the falseness of the map in saying there are traps in corridor 1 because there are none actually, or that the type of traps is incorrect (not pits but darts)?  I don't know that this added complexity is worth it.  It might be based on the context of who gives the players the map and why.

While giving players a map of a dungeon just to screw with what they expect doesn't seem worth it to me, the difference between expectation and reality in a pre-mapped dungeon can lead to surprise, which is one of the joys of exploration.  So, what are some differences that might be more interesting than frustrating?

I think changes that are not due to deception:
I also think changes that allow for additional, on-the-spot strategizing could work.  So, if you know where traps are, maybe you can try to lead the ants into them.  If you know water has filled the Southern portion of the dungeon, you can revise your plans.  Was there anything down there worth retrieving?  If so how will you maneuver through the submerged halls?  Does this require leaving the dungeon altogether and returning with more supplies?

Change of function could be a quality to focus on, too.  I'm learning as a DM that a key aspect of exploratory dungeon delving is player recognition of what a place was for.  And there really aren't too many possibilities (probably less than 100 clear functions we humans use places for in a lower technology setting).  One way to change a dungeon that could be interesting is to juxtapose these.  Have what your map says is a shrine be the orcs' jacks now.  The jail is now a menagerie.  The old kitchen is now a crude alchemical lab, etc.  Discovering and interpreting this repurposing adds back some of the exploration element to the pre-mapped delve.

I think you can give players a sense of this repurposing in a dungeon without them having a map of the dungeon but, it's more complicated.  They have to discern both "This looks like their throne room" and "But I think it used to be a chapel."  With a map that has functions like "chapel" written on it, the players can have a sort of narrative of a place-- how a fortification is set up, how creatures lived day to day-- and the differences they discover will emphasize how things have changed, perhaps giving a sense of time passing and verisimilitude.

Another way to make a dungeon feel real and have a sense of history is to give the map a history.  Where has the map been kept all these years?  Who know about it?  Has anyone used it before?  But most importantly: who made the map?  Were they famous?  Might there be other maps out there made by the same person?  What marginalia or quirks of drawing does this person have?  Did they leave markings or carvings in a dungeon that correspond to the map.  Maybe the map is more than a map-- a whole narrative, a journal, a diary.  Maybe there is no map but a narrative.  This could lead to players having to interpret metaphors "First, fly down the hall of the fire worms"  What the heck does that mean?  This seems like it would be more puzzle-like than allowing for strategy.  The payoff becomes less the sense of surprise than that of understanding.  Not "the altar is  being used as a bed!" but "Oh, the Plate of the God is an altar."

A few ideas to leave you with: