Treasure in the Dungeon

I've spent the last three days fighting LibreOffice and my printer trying to assemble all my treasure tables into something organized that I might share.  Haven't succeeded, but in the process I think I have a simple treasure system hammered out now.  Here is my attempt to organize the chaos of my many treasure item charts: 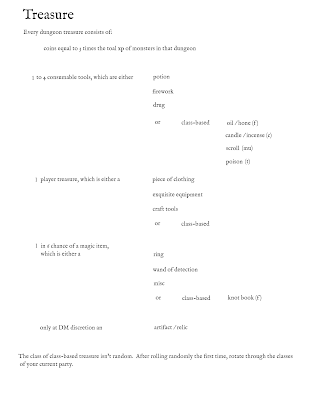 How Much Treasure?
The amount of magic treasure you give out will be too much or not enough based on how many players you have and how often you play.   But for me, with 4-6 people playing 1-4 times a month, I think this system will work okay.   My goal is to get magic into their hands so they can have interesting choices to make and cool plans to come up with using these items.  So, 1-4 consumable magic items scattered in every dungeon. I also want treasure to seem cool, more than just money, so at least 1 player valued treasure per dungeon. And a 1 in 6 chance for non-consumable magic items.

Class-Specific Treasures
I think a simple way to make sure all classes present in your campaign get stuff to use is to rotate which class a class-based treasure belongs to.  Yes, knowing this might break the sense of realism a bit for a player, but class-based treasures are only one of four things that can be rolled, so they might occur so infrequently players don't notice the rotating pattern.  And even if they do, I'm betting it is worth a little gameyness to not randomly end up with magical swords over and over again in treasures found by a party of clerics and magic users.

Birthday Treasures
One curve ball in my treasure allocation process, is that my group and I have a tradition of letting players pick a magic item on their birthday.  I think some of the most awesome items my players have, have come from this route.  It takes away from the excitement of finding things in the mysterious underworld a bit.  But, they only have birthdays once a year, and in our circumstances where our campaign play would sometimes be stopped for long stretches by life it was a way to get some magic items in play.  And they love it.   So, not sure I would recommend it as a general practice, but it is an option that seems to be working out okay for us.

Work to Do
So, I have most of the charts needed for my system.  I still need some class-based consumables for clerics and fighters.  I put my idea of what could work for those in my chart-- weapon/armor oils for fighters and candles/incense for clerics seem to fit well.  I also need to work on more permanent class-based magic items.  A place to start might be One-Page type charts that gather the most iconic magic swords into one place, same for shields.  Or just invent more.  And yes, still haven't finished the player valued treasure tables.  I will try to share these as I finish them.
Posted by Telecanter at 12:39 PM